Broach Of the Month Club: brooches in the form of a book club
August 2008 – September 2009 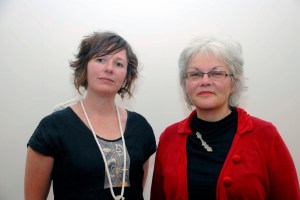 The first Broach of the Month Club finished successfully and I am dreaming up phase two and a documentation project of sorts.  I am in the process of purchasing the original BOM brooches from the makers, accosting people who look like they might be a book club willing to dabble in brooches and working on a manifesto for future clubs.  I miss the regular interaction I had with the wearers, they were a fabulous group.
If you happen to be in Gisborne over the summer, I will be talking about the project at the pecha kucha there on 13th January.  The event organised by lovely wearer, Pene Walsh.

Chris Jones pictured with picture of pen pal Doug McEachern
This project kicked off with a fabulous auction in Auckland and mirror distribution in Brooklyn. The brooches were then worn by the NZ owners for the winter and have all been sent back to the Northern hemisphere to begin their winter life there. There were a few lost brooches and one that has gone missing. This project is much more fluid and slower than Broach of the Month Club, mimicking the ebb and flow of the seasons.  Many NZ co-owners got very creative with their parcels to the north, sending pictures of themselves wearing the brooch, or little gifts from Aotearoa.  It is shaping up to be a lovely exchange.

Jewellery on the Brink of a Relationship: Thank notes to in the form of jewellery
November 2009 – ongoing 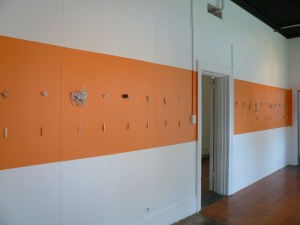 jewellery on the brink installation

While still in its infancy, I am extremely excited about the potential of this project and I think it is shaping up well.  I have sent three items out and received two response back so far.  I am already breaking the rules I have set for myself.  For instance, there is a secret, second list of thank you notes that will push me over the original number of 26.   I am rethinking my initial delegation of items due to potential issue with customs laws regarding the shipment of plant products. I have decided to give myself and the hard working posties a Christmas holiday off before sending any other items out.  I will kick back into gear in mid-January.
I am still really excited about this body of work and continuing my explorations.